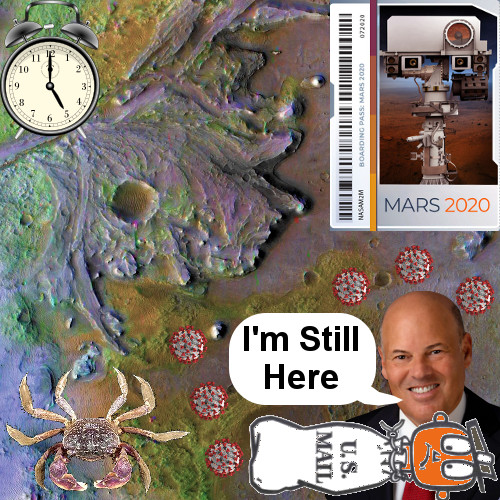 We talked about the Trump trial in the Senate. We knew that there would not be a two thirds vote in the Senate to convict him. We talked about the seven republicans who did vote to find Trump guilty. Some of them have been censured by their state Republican Parties. Mitch McConnell was a sniveling coward through the whole thing.

We talked about the space probes getting to Mars. Last week the United Arab Emirates got their probe into orbit around Mars. They'll be tweaking the orbit of that spacecraft over time. This  past week NASA's Perseverance spacecraft, with the Ingenuity helicopter attached to it, landed in Jazero crater on Mars.

We talked about river deltas and how if life did exist on Mars it would probably not have lasted long enough to start growing things like bones. It took a long time for multicellular organisms to evolve on Earth, and the conditions conducive to life did not last that long on Mars. We also digressed a little bit to talk about the Oklo nuclear reactor that operated in west Africa a very long time ago.

We talked about climate change and how it's been impacting Texas lately. A lot of people in Texas seem to back politicians who say they don't believe that climate change is happening. We wondered how many Texans have changed their minds about that now.

In other climate change news we talked about something that had not been expected to happen with climate change: a small crab is starting to change the coastline of the eastern seaboard so much that the changes are already visible from space!