On this program we talked about the continuing, and escalating all over America, Covid~19 pandemic, and the fact that "Operation Warp Speed" is getting the vaccine out very slowly.

We also talked about Trump and the Republicans playing games with a $2,000 stimulus check. Trump didn't bother to personally take part in the stimulus negotiations, but his Treasury Secretary Mnuchin did. The Republican didn't want any stimulus money going to ordinary people. They finally  compromised on a $600 check. And then Trump said it should be a $2,000 check. Democrats in the House passed that $2,000 bill. When it got to the Senate that creep Senator Mitch McConnell refused to let it come up unless Trump’s attacks on large social media companies and a commission to investigate voter fraud in the election.

Trump flew back from his golf life a day early because one Republican Senator has said that he’s going to oppose the rubber stamp approval on January 6, of the Electoral College vote on the election. Apparently Trump is also calling for all of the violent right wing creeps to converge on Washington, D.C. that day in an attempt to boost Trump’s ego and maybe allow the right wing to have a show of force in the nation’s capital. One hotel that’s been a favorite place for the so-called Proud Boys group to stay in Washington, D.C. is shutting down rather than accommodate that right wing hate group.

We talked about a signal received by a radio telescope that was pointed at Proxima Centauri in 2019. No, it won't be E.T. calling in to a WBAI program, but it is interesting.

We talked about a pharmacist  in Wisconsin purposely leaving about 500 doses of the Moderna vaccine for COVID~19 out so that it would spoil. He's under arrest. 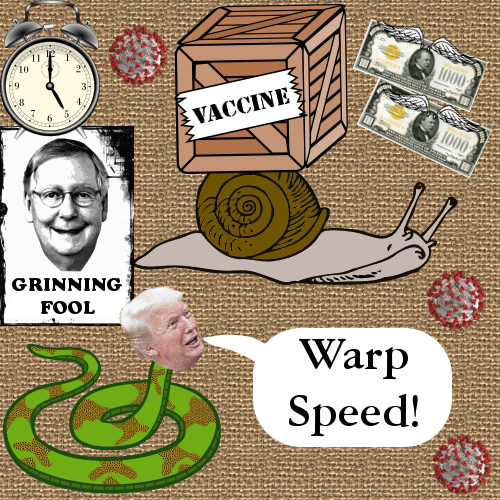